Practicle informations
2 Avenue du Golf
78280 Guyancourt
France
Phone: +33 1 30 43 36 00
Contact:
Website
Aigle
18T trous- par 71- 5961m
The Aigle was created for all levels of golfers and offers 18 holes, which can challenge through undulating ground with bushes and inviting ‘waving’ rough invite you to a unique Scottish course within the heart of France.

Over 6500 yards from the back tees; wide fairways; few bunkers and very good greens invite you to return a good score. The Aigle is a tolerant course for everyone; challenging for most golfers and demanding for the best players.
SSS
72.0
71.0
68.0
67.0
SLOPE
124.0
122.0
115.0
113.0
Albatros
18T trous- par 72- 6695m
Acknowledged as one of the finest championship courses in Europe, both by the professional and the amateur golfer who have measured their talents against the course. The Albatros has also been nominated as a ‘Ryder Cup’ venue. It is not kept for “Top World players”. The Albatros is a demanding course.

From the back tees the total length of over 7000 yards is not the main difficulty: It is the diversity of shots. The diversity of both “links course”, “target golf”, and “water hazards” and “bunkers” will create the demand for a full set of clubs.

The waving fescue grasses of the rough, on a windy day, invite the player ‘for a visit’. The large and carefully placed greens offer both the long as well as the exacting put over the exciting terrain.

The Albatros is a good course. Nothing is hidden from the player but the player must ‘play’ the course to achieve. Be aggressive on the first 6 holes; take the birdie chance on the 12th, and protect your score on the final holes when excitement can challenge the player – particularly in match play.
SSS
150.0
137.0
132.0
130.0
SLOPE
78.0
74.0
71.0
70.0
Urba Golf
9T trous
This 9-hole (2180 yard) par 32 course has been specifically designed for training. Its narrow fairways demand correct play and are ideal for the progression to the 18 hole courses. The Golf National Golf School Professionals invite you to the Oiselet course for either the introduction to golf or to improve the errors that may ‘creep’ into the game: Even for the good player. It can also offer you a course for you to correct your own little deviations.

The French Golf Federation’s Executive Committee and its President Claude Cartier decided the construction of the Golf National in September 1985. Three years of work, from July 1987 to October 1990 finalised the course. It was then inaugurated by Ray Floyd, Greg Norman, Jeff Sluman and Marc Farry.

The concept was based on opening a tip for roads or building diggings. 400 lorries a day moved a total of 1600,000 cubic metres of material with a further 600,000 removed to create water hazards. It was a tremendous challenge, which could have not succeeded without the total support of all involved. One might be surprised with a links course with water hazards. These hazards and rolling terrain similar to that found in many Scottish Links courses became the concept. Trees took too long to grow in a short period of time when the course had to be, from 1991, a championship course. The hillocks or hummocks offered excellent facilities for television coverage of future championships.

After the inauguration of The Golf National, the Albatros Course was the venue for the first French Open in June 1991 when, in a day of both wind and rain, Nick Faldo described the course as both tough but fair. Faldo was not the only world-class player to speak favourably of The Golf National, and it was of prime importance that many others supported Faldo. In March 1994 Golf Weekly ranked The Albatros Course 3rd European Championship Course through a survey carried out within the PGA Tour Professionals. The Albatros Course is now the permanent venue of the French Open.
The Oiselet (Birdie) 9 hole course was opened in April 1991 and the Aigle (Eagle) 18 hole - in November 1991.

BY CAR FROM PARIS
The fastest and simplest way
The less busy way
Then take the ring road towards ROUEN. Then take motorway A13 to ROUEN

In the motorway A12, take direction Dreux.

Go straight on towards Golf National.

After Versailles, go straight on with N12 and exit at the 6th exit

You can get Golf National by train, by car, by metro or by bus in order to enjoy our installations. Clic here
Nearby golf clubs 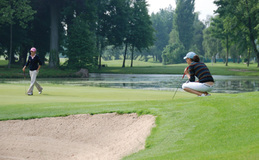 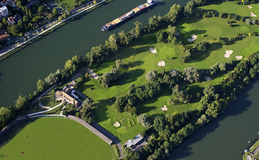 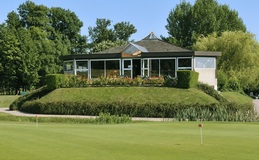 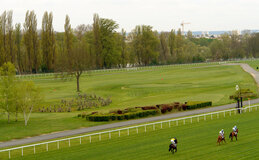 By continuing your visit to this website, you accept the use of cookies to be able to use all bookandgolf.com features.
Accept